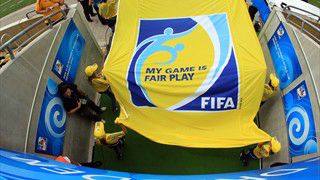 The FIFA 2017 Confederations Cup kicked off in Russia on June 17.

To give fair play more visibility, FIFA created a programme that turned the generic notion into a simple design and an easy-to-understand code of conduct that must be recognised and respected by players and fans alike.

Fair play is also acknowledged and rewarded at every FIFA tournament. The Technical Study Group evaluates and rates the behaviour on and off the pitch of all participating teams in a FIFA competition. The FIFA Fair Play Award is then conferred upon the team with the best fair play score during the tournament.
The Annual FIFA Fair Play Award , presented at the FIFA Ballon d’Or gala, recognises special acts of fair play and often goes to individuals or groups who otherwise enjoy little share of the spotlight.