“TV Good” is the television of the Dubna State University made by creative students and talented young people.

Here you can watch the video report covering the PCU International University Tennis Tournament 2017 in Dubna, Russia. It contains interviews (in English) with the PIUTT President Francis Baron Van Loon, the University of Antwerp tennis player Jonathan Mertens, the President of the Drawing Contest Selection Commision Alain Verschoren, the UA tennis players Tom Devriese and Dimitri Sleeckx and interviews (in Russian) with the winners of the PIUTT 2017, RUDN University players Anastasia Tsyganova and Denis Borisov.

The Antwerp delegation witnessed exciting tennis matches until the very end. The event was held with a special on-stage lighting which created a unique chamber-like atmosphere on the courts and at the arena. Special entertaining zones were organized along with quizzes, contests and sport fun.

The wins scored by Goerges and Dzumhur capped the “VTB Kremlin Cup” which was also marked by a record turnout and the appearance of Maria Sharapova. More information about Kremlin Cup here

Watch the video about the PCU International University Tennis Tournament 2017 by the Dubna TV. You can see interviews with the Tournament Referee Oleg Pengrin, the PIUTT President Francis Baron Van Loon and the University of Antwerp teniss player Femke Fontaine. 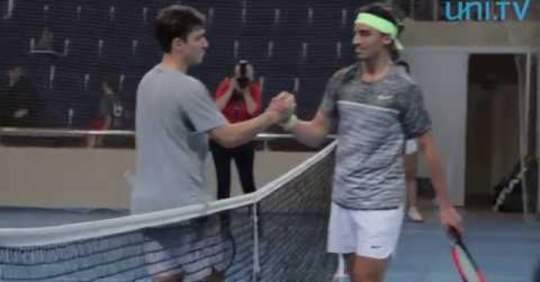 The Special reportage on the Dubna TV Channel “Universum” about the PIUTT 2017 contains interviews of the Dubna State University Rector Dmitry Fursaev, the PCU Commitee President Peter Verboven and the University of Antwerp and RUDN University tennis players.

“Universum” is an educational channel created by the Dubna State University.
TV channel is open for those who are interested in everything that happens in the field of education, high technologies and science.
The focus is on events taking place at the university, work on the creation of new instruments, development of new technologies, which is being conducted at the university.

Thanks to the Tennis Weekend Magazine for being PIUTT Tennis Tournament Media partner and for the tennis magazines in our welcome bags!

Tennis Weekend is a popular in Russia tennis magazine and informational portal about tennis in Russia.

From 20 to 22 October 2017 Dubna hosted the 2nd PCU International Tennis Tournament (PIUTT) – a yearly tennis tournament organized by the University of Antwerp with the assistance of the Dubna State University and endorsed by the PCU Committee to promote ethics in sport and principles of fair play and Universal friendship.

The PIUTT is held as a part of the Panathlon International Movement for the promotion and spread of culture and sporting ethics, according to the official recognition of the International Olympic Committee from 1982.

On October 20, at the PIUTT Opening Ceremony the participants were greeted by the Representative of the Dubna City Administration Evgeny Stein, the Dubna State University Rector Dmitry Fursaev, the Prorector of the University of Antwerp Alain Verschoren, the PCU Committee President Peter Verboven and the Secretary General of the PCU Committee, His Excellency Ambassador, Anicet Gabriel Kotchofa. The PIUTT President, Honorary Rector of the University of Antwerp Francis Baron Van Loon announced the tournament officially open and made the draw.

According to the results of the Draw, the players were divided into two groups in the women’s and men’s singles categories and competed in a Round Robin System. Matches were held on the court of the Sport Complex “Olymp” of the Dubna State University on October 21 and 22. In total, 16 matches of the 1st and 2nd round took place on the first day of the competitions. Group results were announced after the 3rd round of the second day of competitions. In the final round as in the women’s as in the men’s singles categories students of the Russian Peoples’ Friendship University (Russia) and the University of Antwerp (Belgium) were competing for the title of the PIUTT Champion.

In the end, the RUDN students won: Anastasia Tsyganova and Boris Denisov. It is symbolic that in the tennis tournament devoted to the principles of fair play and Universal friendship, the students from the Peoples’ Friendship University of Russia won. The winner of the silver and bronze PIUTT Cup 2017 in women’s singles became students of the University of Antwerp. The second and third place in the men’s singles category also were taken by players of Antwerp delegation.

No one lost. Everyone was awarded medals, certificates and souvenirs at the Closing Ceremony. And the most important thing is that participants really made friends, supported each other in the tournament, played fair, following the rules of ethics in sports and respecting the opponent.

For the first time within the framework of the tournament the exposition of the Antwerp University and Panathlon Drawing Contest, devoted to University Sport and Olympic principals, took place in Dubna. The results of the PIUTT Participants voting for the Honorable commendation were also announced at the Closing ceremony. The exposition of the 15 artworks from the student all over the world was an excellent addition to the tournament and cultural program. The voters’ choice is the painting “Olympiad” by Yana Ivanchina from St. Petersburg, Russia. Already in December, these artworks will be exposed in the Olympic Museum in Lausanne (Switzerland).

Generally, the PCU International University Tennis Tournament is a unique platform on which sport, education and culture blends, thereby embodying the fundamental principle of Olympism and providing an opportunity for students to take part in tennis competitions, cultural program and international interaction with emphasis on Fair Play and Universal Friendship.

Results of the PCU International Tennis Tournament 2017 are available on the PIUTT Official Page of the PCU Committee website. You can download Pdf files of Women’s singles and Men’s singles here .

Today, Saturday October 21st, was the first day of PIUTT 2017 competitions. All participants played the first two of three group matches and players got support from enthusiast spectators on the stands. The average level of the games was high, so the final outcome of group matches will be exciting to watch tomorrow morning.  Games will start at 10:00 in Sport Complex Olymp in Dubna.

The results of the first day of competitions can be found here.

The PIUTT matches were kicked off today at 10.00 h in the Sport Complex “Olymp” of the Dubna State University. The First Round was finished at 14.00 h with a very exciting game of Dimitry Sleecksx from the University of Antwerp (Belgium) and Denis Borisov from RUDN University (Russia). The match ended in a tie-break with the score 5:4, Denis won. You can see the results of the 1st Round on the enclosed picture.

Tonight, on October 20th the 2nd edition of the PCU International University Tennis Tournament (PIUTT) was officially opened in the Concert Hall of the Dubna State University in Dubna (Russia) by the President of the Organizing Committee, Prof. Dr. Francis baron Van Loon.

This year the format of the tournament has changed. Competitions will be held in Men’s and Women’s singles categories. For the 1st round a Round Robin System (“RR”) is used to draw the matches.

After the official welcome speeches, the Draw for the Women’s and Men’s Singles competitions was made; the resulting groups and match schedules (Saturday 21.10.2017) can be downloaded here.

The Dubna State University students arranged musical entertainment and after the Opening Ceremony all players, officials, delegation members and volunteers had a light dinner buffet together with a lot of social interaction.

Tomorrow at 10:00 local time the first match of the day will be played at the Sport Complex Olymp. Results will be posted online.